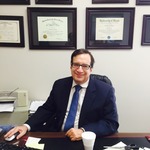 I help people live, work, and remain safely in the United States.

That is exactly what I've done for almost 40 years.

I actually began my career as an Immigration lawyer working as a law clerk for a personal injury attorney in 1981. Back in those days, if you were a law student clerking for a firm, there were two possible results once you graduated. You were either offered a job as an associate attorney, or you left to find a position elsewhere.

Sure enough, my boss called me into his office just before graduation and said...

"I'm sorry Ken. I've been thrilled with your work, but only have one position available. I fought for you, but I'm only a junior partner and one of the senior partners insists on keeping his clerk"

Seeing my disappointment, he continued

He shrugged "So? You'll learn"

And boy did I learn.

After spending a short time at that firm I was hired to be the sole associate of the busiest Immigration Law firm in South Florida,

Thousands of Immigration cases a year. All my responsibility to win. Permanent Residency (Green Cards), Work Permits, Citizenship, Political Asylum, Deportation Defense, Visas. You name it and I did it.

Within one year I handled (and won) more Immigration cases than most lawyers see in a lifetime.

Less than two years later my reputation for expertise, hard work, and proven results reached the point where I was asked by The American Immigration Lawyers Association and The Florida Bar, to lecture on Immigration law to other attorneys. Not long after that I started my firm and began appearing on radio, television, and in newspapers.

It turns out that not getting that job as a personal injury attorney was one of the luckiest things that ever happened to me. Four decades later I'm still doing the work I love while continuing to get extraordinary success for my clients.

Call me now if you want to be one of those clients getting the proven results that you need.

Mr. Forman's expertise has been featured on: